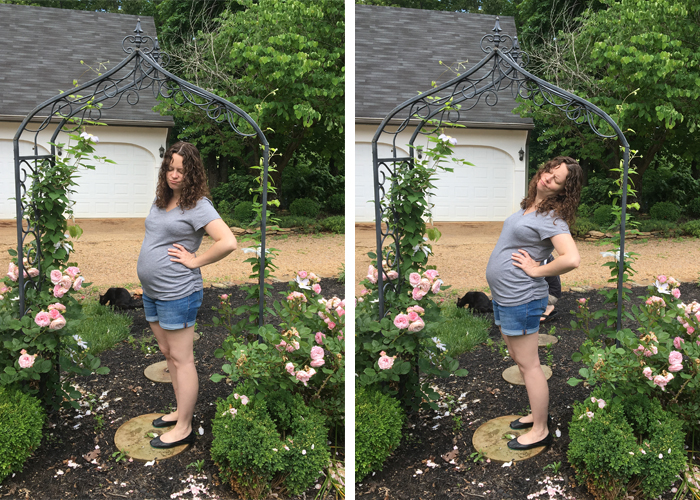 Featuring two of the most flattering photos of me, ever.

Despite being nearly 32 years old, and despite how much time and effort I’ve put into successfully becoming pregnant over the past several years, there have been a few things that I was not expecting to experience when I made it to this part of my journey.

I’m not really a “get on the internet and read all the things” kind of person when it comes to certain subjects. While Dan would spend time online seeking out answers and learning all he could throughout our infertility journey, I felt I had enough weighing on my mind already and would simply let him educate me with things he discovered and deemed significant. This has carried over into pregnancy as well, where the extent of my research* has been to simply skim through What to Expect When You’re Expecting, read Bringing Up Bébé, and check for weekly baby updates on TheBump.com. (I mean, I need to know what vegetable or fruit I can compare his size to this week.)

*I’m not as willfully ignorant as I’m making it sound, promise. We’ve taken a birth-prep class at the hospital already and I also have lots of questions for my OB at each visit. I’m just not over-consuming various forms of information online.

Perhaps you can blame this aspect of my personality for the things I wasn’t expecting during pregnancy, or perhaps these are things we simply don’t concern ourselves with learning before we’re at this stage in our lives…I really can’t say. All I can say is that my pregnancy has been a series of new discoveries and experiences along the way.

All of you moms out there will probably just say “duh” to all of this now that you’ve been there…but were these things you knew going in, or were they new to you too?

1. The first trimester would render me nearly helpless.

While I was no stranger to the intense effects of increased hormones in my body (experienced during fertility treatments), I wasn’t expecting the first trimester to totally take me down the way it did. The best way to sum it up is that it felt like I was in the beginning stages of having the flu, except that lasted for at least eight weeks. My friend described the exhaustion of pregnancy as being “to your bones” and she wasn’t lying. I was also nauseous most of the time, which meant the kitchen was off limits. Eating anything was difficult, and helping Dan figure out what I could stomach was a daily struggle. I could also only stand for short periods of time; again, like when you have the flu and your body is screaming at you to “go lay back down!” None of it was fun by any means and I had a hard time letting go and depending so heavily on Dan take care of me. (I hated to know he was doing all of my household chores on top of working all day; our easy life balance was totally upended.)

I mean, we’ve all heard about “morning” sickness (ha), but who imagined a bedrest-like situation?

2. Unisom & B6 are a Magical Solution to Morning Sickness

Okay, so maybe the word “solution” is a strong one (and we all know how I feel about the phrase “morning sickness”), but this little combination of over-the-counter medication and vitamins are somehow able to make the throes of the first trimester just a little more bearable.

The nausea began for me around week six of pregnancy and I was eager to find any remedy possible. Ginger chews and ginger ale worked for the first week or so of feeling that way, but as my hCG levels climbed so did my body’s resistance to the effects of the almighty ginger root. Soon I was on phone with my doctor’s nurse begging for prescription relief. Unfortunately (or maybe fortunately, actually,) my doctor doesn’t trust the back-and-forth studies on the effects of Zofran use during pregnancy and would not prescribe it to me.

The next recommendation was to try this Unisom (doxylamine) and Vitamin B6 combo. I’m not even sure how it works, but it does. Not that I ever truly felt much better than my description of the first trimester above, but these magic pills definitely helped with the extreme nausea I would feel if I skipped a dose or took them too far apart. I would take half of a 25mg Unisom pill with a 25mg B6 vitamin around 8am, then the same dose again around 2pm, and then around 8pm I would take a whole 25mg Unisom (and no B6). Unisom (doxylamine) is a sleeping pill and B6 is a vitamin used to help covert food to energy; I’m guessing you take that to cancel out the sleepy effects of the Unisom. Make sure you are using the doxylamine version of Unisom and not the diphenhydramine version; that second kind is basically Benadryl and does nothing to help with nausea.

***If your doctor ever tries to prescribe the newer drug Diclegis to you, don’t do it. It is literally made with the exact ingredients used in Unisom and B6, except most insurance won’t cover it and 60 pills can cost you upwards of $450! What a rip-off! The only difference is that they’ve made the B6 ingredient “extended-release.” Don’t fall for it. How they’re able to charge that much is beyond me.

Nosebleeds during the first trimester would have just been horrible icing on the disgusting cake, but thankfully this wasn’t a symptom I experienced until I was in my second trimester. The first time, I was driving to my friend’s house around week 16 when I suddenly sneezed. I thought nothing of it until I felt what I believed to be a runny nose and quickly reached up, only to pull my hand back and see it covered in blood. (Remember, I was driving…I didn’t exactly have any tissues on hand.) By the time I stopped in her driveway I was dripping blood all over my jacket and wondering what the heck happened to cause a nosebleed that severe.

Leave it to Dan to have already read that nosebleeds could become more common around this time, but I had no idea. (Guess he could have told me.) Apparently, the blood vessels in our noses expand during pregnancy. That, combined with a major increase in blood supply, is the perfect storm for spontaneous bouts of bleeding all over yourself. I now keep a stockpile of extra napkins in the car, but “luckily” all of my other nosebleeds lately have taken place at home.

Okay, so this isn’t something about “pregnancy” in the same sense as the other points here, but it is something I never thought about prior to being pregnant and didn’t imagine would be so difficult. I was only about eight weeks into my pregnancy when I started feeling uncomfortable in my regular pants. I headed to Target and bought one of those belly bands that you wear over your jeans so you can wear them unbuttoned a while longer, but after around week eleven I was ready for legit maternity pants. Finding a pair of jeans, a pair of black leggings, and two pairs of shorts (one denim, one black,) wasn’t too difficult because those are fairly simple things and I didn’t need much variety, but tops are a different thing.

Have you spent any time in the maternity section at Target lately? The entire section takes up around 10 square feet of space, if that, and offers one v-neck tee in six colors, one tank in six colors, and then maybe three shirts in the ugliest prints and least flattering cuts I’ve seen. (This is definitely only my opinion here.) Hoping for more variety and something more my style, I headed to Old Navy…but they stopped selling their maternity line in-store sometime over the past year. I stopped by Kohl’s…the same v-neck as at Target, in five colors! H&M only had shirts and tanks in black, white, and navy blue, plus two or three other tops with long sleeves (in May). We do have a Motherhood Maternity here, but I’ve been hesitant to spend $45-60 on a shirt I hope to only wear for the next five months. I did get a couple during a good sale, but I’m pretty much just rotating through the same six shirts right now.

I also came across this article on Racked and feel like I could have written it myself.

Thankfully (yet frustratingly), there is a little more variety to be found online. I just wish that I could pop into a store a pick up something for a weekend get-together the way I used to, leaving with something that feels like “me,” that I know fits well, and that I don’t have to pay extra for shipping and wait 5-7 days for. Shopping while pregnant definitely hasn’t been very fun or convenient in any way.

5. Round Ligaments Are the Devil

I had no idea what round ligaments were until several weeks into my pregnancy. I was stretching in bed one morning when I suddenly had a horrible pain on my lower left side, sort of where your leg meets your bikini line area. At first I was actually afraid that I’d pulled a muscle, but over the next couple of weeks that eventually turned into a fear that I somehow had a hernia. At my next OB appointment I told her my concern and she waved it off as common round ligament pain that could be expected during most of pregnancy…surprise!

Round ligaments have been described to me like this: Imagine your uterus is a rectangle-shaped pillow; round ligaments attach to each corner of that pillow and hold it into place. As your baby grows your uterus grows, and as your uterus grows those ligaments get pulled and stretched. While I’m relieved to know that I’m not in any danger of requiring surgery for a hernia (ha!), it really does suck to stand up too quickly sometimes and end up doubled over with stabbing pain in your groin area.

Obviously, everyone’s experiences during pregnancy are unique to them and not everyone will experience the same things. They say that each pregnancy is different as well, so I could have a very different experience when we decide to do this again. (Fingers crossed for an easier first trimester next time!) There are still things I’m learning along the way as this pregnancy progresses, so I can only imagine what other surprises I’m in for before the end of September!

Was any of this information new to you? If you’ve already experienced pregnancy, are there any other surprises I have to look forward to?