Our first full day at the Outer Banks we decided to grab some coffee and drive south as far as route 12 would take us. While we could have continued further by taking the ferry to Ocracoke Island, and then again to Cape Lookout, we decided to take our time and enjoy everything there was to see between Nags Head and Hatteras. (This meant that we missed out on the Ocracoke Lighthouse, but there’s always next time.)

On this trip, we saw four of the five lighthouses of the Outer Banks.

The first lighthouse we came across was the Bodie Island Lighthouse in south Nags Head. This area is part of the Cape Hatteras National Seashore, a narrow strip of land with route 12 down the middle, with the ocean on one side and the Roanoke Sound on the other.

The first Bodie Island Lighthouse was built in 1847 a bit farther south, as was the second. This structure, built in 1871, was the third. Two keepers were hired to alternate shifts and live in the duplex keepers’ quarters, though their families had to live on nearby Roanoke Island to be near schools, as Bodie Island was undeveloped and remote at the time. The light was electrified in 1932 and ownership given to the National Park Service in 1953. 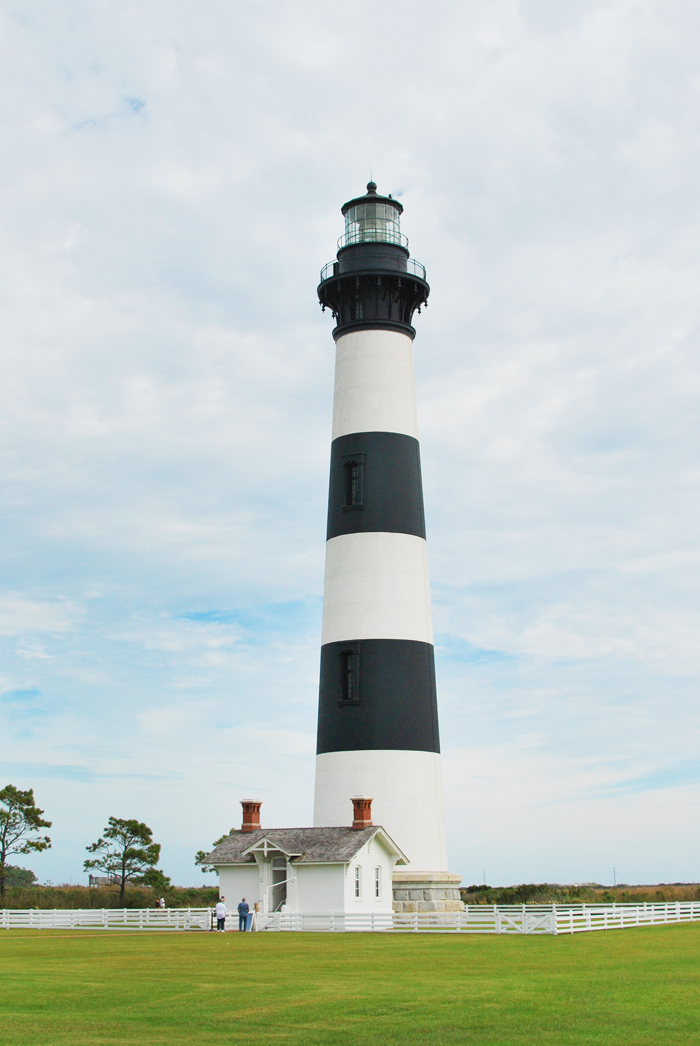 I feel like the Cape Hatteras Lighthouse is one of the most recognizable in the United States, with its iconic spiraling paint design. It was originally built a short distance away in 1799. That first structure was too short and didn’t do much to help the ships caught off guard by the nearby shallow seas of Diamond Shoals. The height was extended over 50 years later, but expensive repairs in the late 1860’s called for a new structure at another location, which was officially lit in 1870. It was decommissioned in 1935 due to erosion and handed over to the National Park Service two years later. In the 1900s it was on again, off again, until it was finally moved a safe distance from the beach where it stands today. 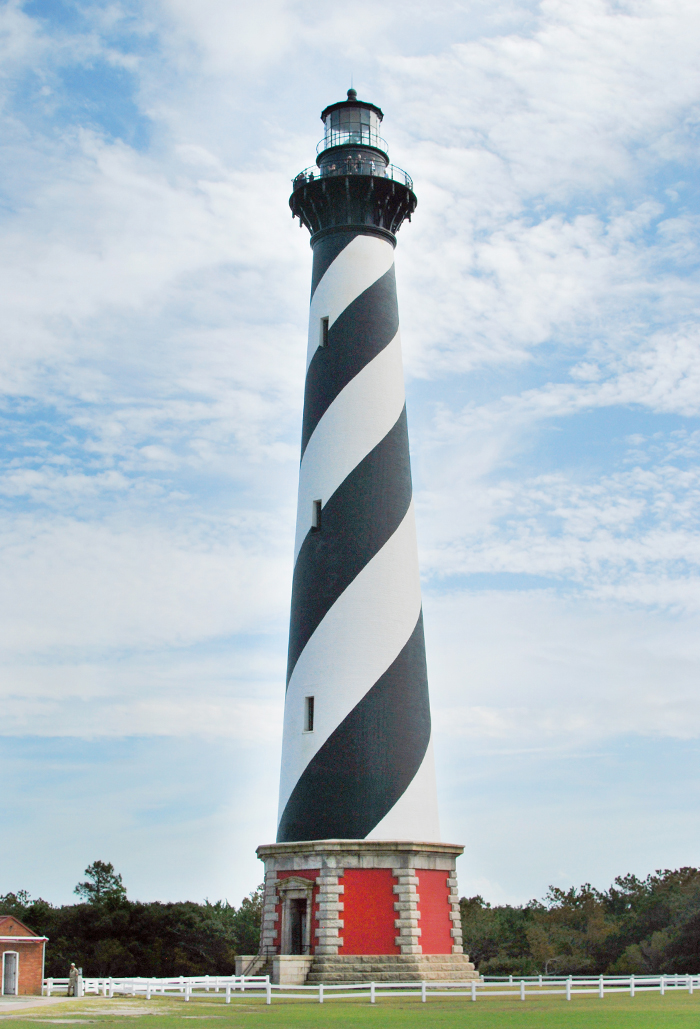 I loved making the drive between these two, which took a little under an hour. (The lighthouses were all built 40 miles apart.) There were a lot of places to pull over and hike out over the dunes to the beach, but beware if you’re not in a four-wheel drive vehicle because the shoulders are sometimes nothing but deep sand. Between October and May, 4WD vehicles are allowed on the beach itself, so next time it would be great to either have one of our own or rent one from one of the many rental companies there. You also pass through the small beach towns of Rodanthe, Waves, Salvo, and Avon on the way.

Another day during our visit, we decided to drive as far north as we could to Corolla. And when I say as far as we could, I mean we literally drove until the pavement turned to sand. Again, four-wheel drive vehicles are able to go much further…all the way to Virginia Beach, in fact, if they so please. This means we missed out on seeing the wild horses, but we’ll definitely consider a tour or our own 4WD next time we visit.

The Currituck Beach Lighthouse was built in 1873. This light filled the “dark space” that existed at the time between the Cape Henry Lighthouse to the north in Virginia and the Bodie Island Light to the south. The duplex keepers’ house has been restored and now serve as private residences, and are surely the most beautiful of the three we saw on this trip. The lighthouse is now part of the nearby restored Historic Corolla Village. 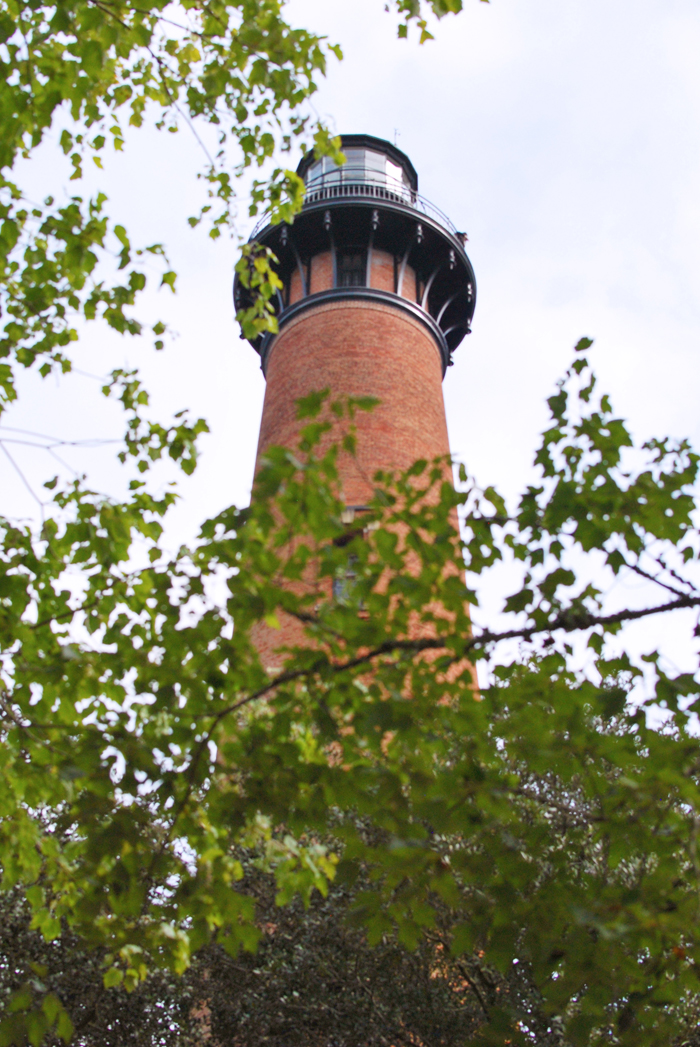 This existence of this lighthouse was new to me, and is probably new to a lot of people who think they’ve seen all of the OBX’s coastal lighthouses. Everything about the Roanoke Marshes Lighthouse is different than the other four, most visibly its size, the fact that it sits over the water, and that it isn’t visible from the ocean. This new reproduction was completed in 2004, but its lens dates back to the 1800s. There were three previous Roanoke Marshes Lighthouses, helping sailors navigate the Roanoke Sound and find their way into the ports, built in 1831, 1858, and 1877. The new structure sits just 40 yards off the shore of downtown Manteo and is open to the public. 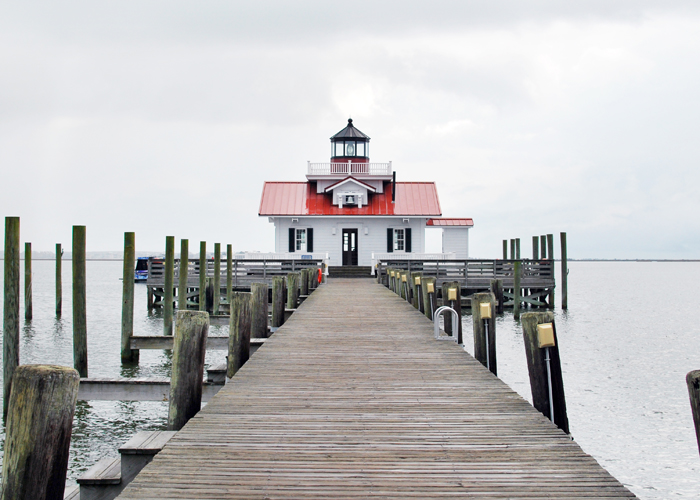 I’m not sure when I decided that seeing nearby lighthouses was a must for me. Most of my childhood trips to the beach usually included visits to them, so perhaps I simply consider it a necessary part of the beach experience. I realized this when I immediately began seeking out lighthouses near Virginia Beach when we were there with my parents a couple of years back.

You can read about the Cape Henry Lighthouse at Fort Story, Virginia here.